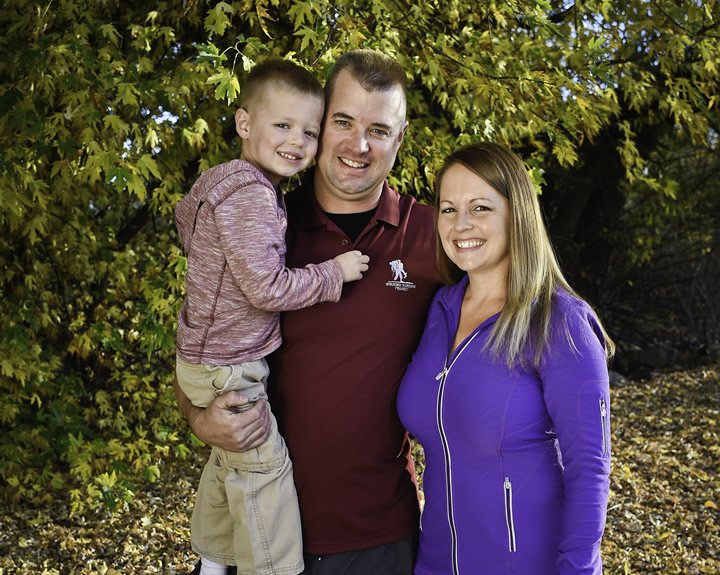 Life as he knew it ended for Chad Brumpton on Mother’s Day 2005, along the banks of Iraq’s Euphrates River.

At the time, Chad was a tank commander with Company C, 4th Tank Battalion, 4th United States Marine Division. His M1 Abrams was the quintessential tank. In fact, he had been through improvised explosive device (IED) blasts before, and they’d barely scratched the paint.

The Mother’s Day blast was different, however. Chad’s tank rolled directly over a powerful IED buried in the dirt. The blast breached the bottom of the tank, thrusting Chad’s head into the hatch and tearing apart his legs.

Sergeant Luke Miller and Chad’s driver, Lance Corporal Fernando Lazalde, pulled Chad from the wreckage while under enemy fire. Miller – who would later receive a Bronze Star with Valor for his courageous actions –went back to the tank while still under fire to save the team’s gunner, who was also injured in the blast.

“My son is named after Luke for saving my life,” says Chad. “I think he deserves the Congressional Medal of Honor, but I'm a little biased.”

All four men survived, and eventually Chad returned to his native Idaho to recover.

“My goal in recovery was to go back to the way everything was before,” Chad says.

Desperate to get back to a normal life, he deliberately shortened what should have been an 18-month recovery to about seven months. He medically retired from the Marines and immediately started a job as a probation officer.

At first, Chad thought he achieved his goal of returning to a normal life. But it came with a price.

“It wasn’t a good quality of life,” Chad acknowledges. “My left foot didn’t really work; there was so much nerve damage. There was constant bone-on-bone contact. I had to take heavy narcotics just to get out of bed. It affected not just my health, but my post-traumatic stress disorder (PTSD).”

Chad finally faced reality in 2008 and had his legs amputated below the knee. The decision was a year in the making, but it would eventually allow him to live with less pain and without the prescription drugs that clouded his mind. His old life was effectively over, but instead of mourning, he viewed it as a celebration.

“I was ready to get off all the pain medication and start doing things the way I used to,” Chad says. “Twelve weeks after surgery, I put on my first set of legs. It was euphoria going from a wheelchair to standing again.”

The triumphs continued as Chad explored what he could accomplish without pain in his legs. He tackled snowboarding first. Then, in 2010, he was fitted for a special set of running blades.

“All I wanted to do was be active again,” Chad explains. “Now my physical fitness is all about staying healthy and young so I can keep up with my son.”

Chad also decided it was time for a professional change. He quit his job as a probation officer to take a year to rest and recover. After talking with the people who made his prosthetics, Chad learned more about the profession, and began training for a new career.

"I’m an amputee who likes building things, so the chance to use tools to think about solutions to different patients' needs, and the ability to try out new prosthetic feet is amazing,” says Chad.

The last piece of Chad’s recovery was to gain control over his PTSD through the aid of Wounded Warrior Project® (WWP).

"The biggest thing [about being involved with WWP] has been getting connected with others, seeing people who have been where I've been, and who have gone through some of the same things. Telling my story helps me accept what has happened and helps me thrive despite my PTSD," Chad says.

Mentoring other warriors has also helped Chad acclimate to his new life.

"WWP gave me the opportunity to get involved with the Peer Mentoring program, and now I mentor an Air Force veteran,” says Chad. “The feeling of giving back to others, making sure they understand their VA benefits and the other resources they might be able to use is great. It always feels good to serve others. I served in the Marine Corps; I served in law enforcement, and I continue to serve now.”