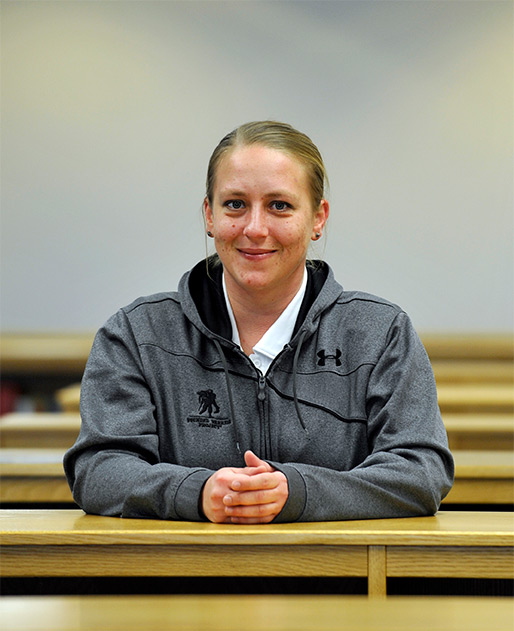 Angie Peacock remembers the first time she connected with another post-9/11 veteran. It was 2009, just around the time she was taking charge of her life after years of self-medicating to dull her depression and post-traumatic stress disorder (PTSD).

“You didn’t have to explain yourself or tell your story. Everybody just understood,” she says about the Wounded Warrior Project® (WWP) Alumni Summit. “I walked away thinking ‘Wow, maybe I do have something to offer.’”

The Angie who came home from Iraq in October 2003 might not have considered such a positive thought.

Angie's emotional spiral downward started in South Korea, her first duty station abroad after joining the U.S. Army in 1998. An unreported sexual assault she experienced planted the seed for the PTSD that would develop when her battalion deployed to Baghdad, Iraq. While there, Angie coordinated and participated in convoys, living under constant fear of snipers and improvised explosive devices.

When Angie returned home after more than three years overseas, doctors diagnosed her with PTSD and she was medically retired. “I felt like I asked for help and was kicked out,” Angie says. “I thought my life was over when I couldn’t put on my uniform anymore. I loved the Army and didn’t want to leave.”

After retiring from the Army, Angie continued to struggle, using prescription medication and illegal drugs to cope with her PTSD. Her marriage fell apart and she was evicted from her home.

“PTSD took me to a level of depression I didn’t know existed,” Angie said. “I wanted to die. It was like a chemistry experiment. How much can I take in one day to kill myself?” After several suicide attempts, Angie saw a doctor who recognized the urgency of her case. Angie committed to rehabilitation and began participating in WWP events where she was able to connect with other veterans who understood what she was going through.

The WWP Alumni Summit was the biggest break in her recovery and showed her the power of accountability and engagement. Then in February 2014, the Physical Health and Wellness team at WWP convinced Angie to try a 10-week CrossFit program. She’s been active ever since.

Her growth through these programs gave her the confidence to go back to school. She received her bachelor’s degree in psychology and wants to get her master’s degree in social work. She says, “The day I earned my degree felt like a victory...WWP truly empowered me!”

Angie remains dedicated to serving others as a WWP peer mentor to help and empower other warriors, and one day she hopes to become a therapist for other veterans living with PTSD.