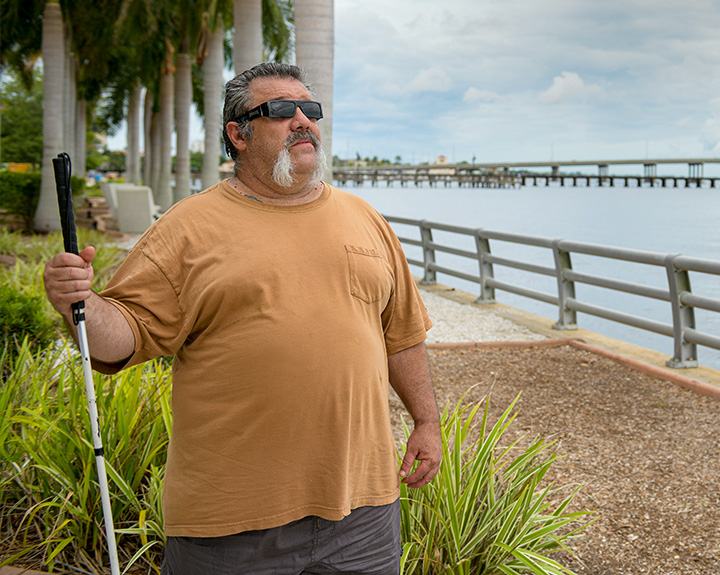 “Thanks to Wounded Warrior Project, I still have a purpose. They helped me be myself again, and now I’m able to help my fellow Warriors.”

Aaron Cornelius saw a lot of combat while leading U.S. Army soldiers through three deployments in Iraq. But it wasn’t until the last deployment that, as Aaron says, “all hell broke loose.” It was March of 2008 when his unit suffered multiple casualties at the scene of an improvised explosive device (IED) attack. When Aaron arrived, he tried to open the hatch to save the soldiers inside the burning Humvee — but it became immediately clear they were gone. Little did he know, the heartbreaking death and destruction of that moment was one of the last things he’d ever see. Just days later, the vehicle he was riding in was blown up and the shrapnel tore a tennis ball-sized hole in his skull, leaving him completely blind.

Not only did Aaron’s medical retirement mean he had to make the difficult transition to civilian life with a traumatic brain injury (TBI) and post-traumatic stress disorder (PTSD), he also had to transition to a life without sight.

The first tears came when he realized he would never be able to see his daughter’s face again. “I started to notice the darkness a lot,” says Aaron. “I couldn’t do anything at that point. I couldn’t walk. I felt helpless. I felt like the military just kicked me to the curb and that I was not good anymore — worthless.”

Aaron’s first contact with Wounded Warrior Project® (WWP) occurred while he was still in the hospital. “At the hospital, you get all these visitors,” says Aaron. “Then this one guy came in and he kept coming back, checking on me almost every day. He brought me a backpack and all kinds of information and walked me through the madness of transition and all of the paperwork.”

“That WWP guy stuck with me,” recalls Aaron. “Even after I left the hospital, he would call and see how I was doing. WWP was constant and made me feel like I was being taken care of. All of the things we had to do or figure out, we’d say, ‘Who’s going to help us with that?’ WWP stepped right in and took the reins. That was a beautiful thing.”

Aaron says a major turning point in his recovery came when he met other injured soldiers at a WWP event. “I was able to be myself outside of the house,” says Aaron. “I realized I could be a normal guy, a normal person, and there were people like me I could talk to.” Since then, Aaron has participated in many WWP events to connect with his fellow warriors. He cherishes any opportunity to speak with and motivate other veterans — especially those who have a hard time coping with life after the military.

“Too many are killing themselves because they can’t cope,” says Aaron. “I want to find these guys and say, ‘Call me. I don’t care if you’re hurt or whatever. Call me. If I have to, I’ll come out there with my dog and get you.’ I want to show these brothers that we’re still together. We can still be right there to back each other up.”