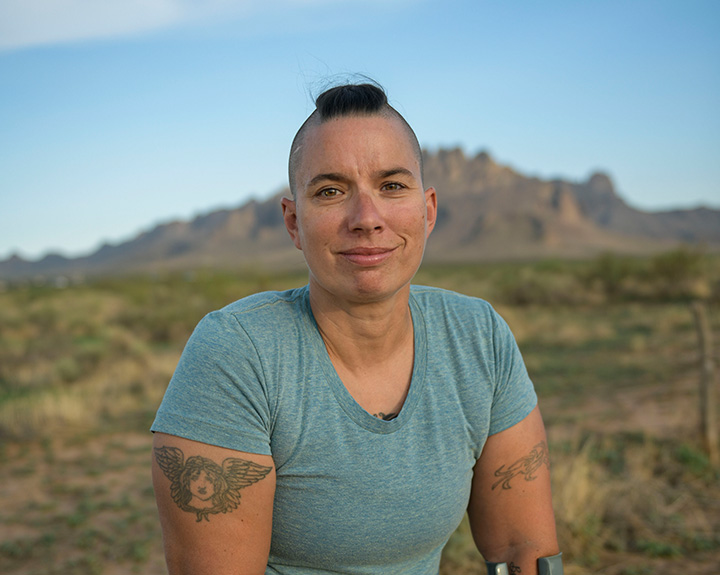 “Wounded Warrior Project helped me find a support network of people who inspire me to keep going and who help me realize I can still do anything I put my mind to.”

In 2011, while Beth King was deployed to Afghanistan, the helicopter she was riding in took a direct hit from a rocket-propelled grenade. With the inside of the aircraft on fire, Beth fell out the hatch and dangled in the air from her backstrap until the pilots were able to make a hard landing. Because she had no visible wounds, she was sent back out on another flight just four days later. But it wasn’t long before she realized she was seriously injured.

“I felt devastated, and I asked for help,” says Beth. “But the military is mission driven, so if you looked like you could work, you worked.”

Beth’s injuries turned out to be very severe. Hanging from her backstrap had caused trauma to her spine, and the explosion and shock wave left her with a traumatic brain injury (TBI). “I had 24/7 pain in my head,” says Beth. “I was foggy and couldn’t understand things. After a few months, I started dropping things, experiencing balance issues, and having a hard time walking. After 18 months, I finally started getting treatment.”

Soon after her injury, Beth also began to experience symptoms of post-traumatic stress disorder (PTSD). She fell into depression and struggled to leave her house. “Everything seemed to be a trigger,” says Beth. But after nearly four years of not being physically active, she decided in 2016 that it was up to her to make the most of her new situation, so she took up cycling to build her strength.

Two years later, she participated in her first Wounded Warrior Project® Soldier Ride®, and it changed her world. “It was the first time I had done anything independently since my injury,” says Beth. “I realized I don’t have to lose an activity just because I don’t do it the same as everyone else.”

Besides making new friends, she learned about other adaptive sports opportunities that have helped her thrive. “I’m not just playing sports,” says Beth, “I am bettering myself physically, emotionally, and spiritually. Wounded Warrior Project gave me a community of people who understand the struggle is real. And being a part of something bigger than myself played a huge part in my mental health recovery.”

Beth’s next mission: to educate people about the importance of seeking treatment as soon as an injury occurs, especially when their injuries aren’t visible. “I believe that waiting amplified the effects of my injury,” says Beth. “TBIs can progress and get worse while not treated. I also want to educate people about the positive effects of adaptive sports. If I had known about that sooner, maybe I would not have gotten so dark, so withdrawn, so given up on life. Now I truly believe there is nothing I set my mind to that I will not be able to figure out how to do.”