Meet Sen. Joni Ernst of the Great State of Iowa

As a former company commander and retired lieutenant colonel, my experience serving our nation in uniform for over 23 years guides my decision-making daily. In the Senate, I’ve made ensuring my fellow veterans have the support they need one of my top priorities. The men and women who have selflessly sacrificed in defense of our freedoms, and our way of life, deserve nothing less than the benefits they were promised and a quality of care we can all be proud of. As a member of the Senate Armed Services Committee, I’ve also continued to work to equip our military with the resources necessary to defend America today and in the future. And I’ve been able to do a lot of this important work in a bipartisan way.

In 2014, I was elected as the first woman to serve in federal elected office from the State of Iowa — and the first female combat veteran to serve in the U.S. Senate. Fast forward to today — in the 117th Congress, women make up just over a quarter of all members — the highest percentage in U.S. history, and Iowa’s congressional delegation is majority female for the first time in our state’s history. It is truly an honor to work alongside so many remarkable women who come from different fields and backgrounds. My colleagues and I may not agree on all issues, but we can all get behind the idea of more women serving in elected office, as CEOs, as soldiers, as engineers and manufacturers, and in any other profession in our society.

Women continue to make strides in serving in critical roles within our nation’s military. As a woman who served in combat and commanded troops during Operation Iraqi Freedom, and with my own daughter who is going through training right now at West Point, I understand just how important it is for all service members to be properly equipped for the battlefield. That’s why I’ve worked hard to continue the development and fielding of protective body armor designed specifically for female servicemembers.

We also know that, tragically, female veterans commit suicide at six times the rate of non-military females. I was proud to get my bipartisan legislation signed into law to require the Department of Veterans Affairs (VA) to identify the most effective programs and approaches in reducing suicide rates among female veterans.

As a veteran of the Global War on Terrorism myself, watching the disastrous collapse of Afghanistan was extremely heartbreaking. I’ve heard from so many service members and fellow veterans of the Global War on Terrorism, many of whom are disheartened, distraught, and disappointed. I also heard from so many Gold Star Families who lost their spouses, fathers, mothers, brothers, sisters, sons, and daughters during the war. As they watched the Taliban retake control of Afghanistan, many even questioned if their family member’s sacrifice was worth it. 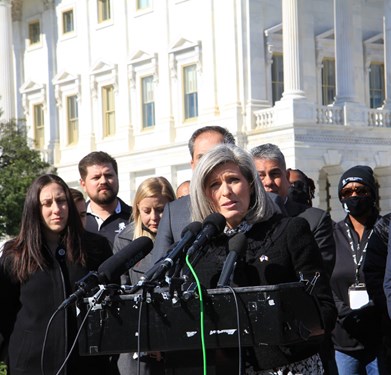 I want them to know that the brave Americans who have kept us safe in the 20 years since Sept. 11, 2001, are heroes — every single one of them. They’ve succeeded in protecting our citizens and allowing us to enjoy the freedoms and liberties we possess every day. That’s why I continued to fight to honor the servicemembers, fallen soldiers, their families, and all those impacted by the Global War on Terrorism with a memorial on our National Mall. When folks from our home state of Iowa, and across the country, visit our nation’s capital, they should have the opportunity to honor their fellow Americans who served our nation honorably during this war. The Global War on Terrorism Memorial on our National Mall will be a longstanding testament and reminder of their selflessness for generations to come — and I’m so proud to help make this memorial a reality.

Our service members carry out selfless duties every day to protect our nation and oftentimes they face serious and unique challenges. We cannot fail them. I joined with Sen. Mark Kelly of Arizona on the Save Our Servicemembers (S.O.S.) Act, which directs the Pentagon to evaluate the effectiveness of their suicide prevention efforts and to improve its data collection, reduce bureaucratic duplication, and strengthen collaboration between its offices. These are simple steps that will save lives.

I was proud to support, and get signed into law, the Sergeant Daniel Somers Veterans Network of Support Act. This bill creates a pilot program to allow active duty servicemembers transitioning to civilian life to designate up to 10 loved ones to receive information from the Department of Veterans Affairs (VA) about benefits and services available to veterans through the VA and community partners. I’ve also worked on bipartisan legislation to establish an interagency committee on the development of “Green Alert” systems that would be activated when an at-risk veteran goes missing.

As you mentioned, my bipartisan bill with Sen. Maggie Hassan of New Hampshire would direct the Department of Veterans Affairs (VA) to designate one week per year as “Buddy Check Week” to organize outreach events and educate veterans on how to conduct peer wellness checks. This legislation will help our veterans recognize signs of suicide risk so they can check in with their fellow veterans and help get them the care and support they need.

Oftentimes, those who are struggling may turn to their friends or peers before a medical professional, and it’s important we educate folks on the resources available. For anyone who wants to do more to look out for their friends and loved ones, I’d encourage them to visit the Department of Veterans Affairs website to learn more about the resources available. The Veterans Crisis Line offers free, confidential support, 24 hours a day, 7 days a week, 365 days a year.