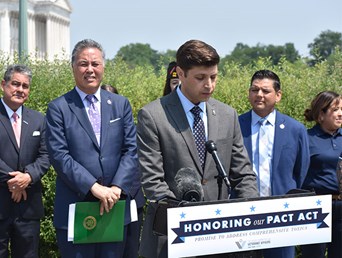 An estimated 3.5 million veterans have been exposed to contaminants such as burn pits, toxic fragments, radiation, and other hazardous materials during deployment. They are now suffering severe, rare, and early-onset health conditions. Often, illnesses manifest years after discharge, resulting in veterans struggling to obtain health care and benefits.

VA recently announced it would recognize asthma, rhinitis, and sinusitis as conditions presumed to be caused by exposure to particulate matter in Southwest Asia. On August 2, they began processing disability claims for veterans suffering from these conditions due to military service. WWP is pleased with VA’s decision to expand coverage and is working with Congress and VA to recognize more conditions.

The Comprehensive and Overdue Support for Troops (COST) of War Act of 2021, and H.R. 3967, Honoring our Promise to Address Comprehensive Toxics (PACT) ACT, seek to fulfill our nation’s responsibility to provide health care and disability compensation to veterans fighting the effects of toxic exposure connected to their military service.

The COST of War Act and Honoring Our PACT Act would further improve VA health care and benefits for veterans exposed to toxic substances in the following ways:

On July 27, Wounded Warrior Project CEO Lt. Gen. (Ret.) Mike Linnington voiced the needs of WWP warriors during a roundtable discussion with House Speaker Nancy Pelosi (D-CA-12) about toxic exposures: “The brave women and men who volunteered for military service after 9/11 did so while understanding the threats posed by roadside bombs and enemy fire. For some, the greatest threat would ultimately be prolonged exposure to toxic fumes from burn pits and other airborne hazards.

“We estimate [there are] as many as 750,000 Iraq and Afghanistan veterans who are currently ineligible for VA health care enrollment because they have been unable to establish service connections within five years of discharge. These veterans answered the call to defend our nation. Now we, as a nation, must ensure that those who are struggling with devastating illnesses have access to the care and benefits they deserve.”