Click Here to Go Back to Project Advocacy News

Click Here to Go Back to the Government Affairs Page

The Needs of Wounded Warriors Continue 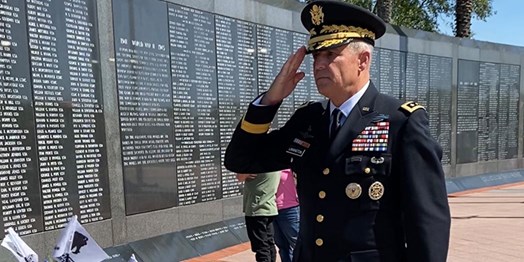 Twenty years ago, the worst terrorist attack in the history of the United States of America took from us thousands of men, women, children and loved ones. It was a day that shocked and angered all of us. The tragedy of that day also brought out the best of who we are as Americans—with brave men and women fighting to save others at the World Trade Center, the Pentagon and aboard United flight 93.

Countless military service members and veterans have told me how Sept. 11 inspired them to stay in service or step forward, enlist and serve their country. That day launched a multi-decade, multinational military campaign that spanned the globe, most notably in Iraq and Afghanistan.

A great deal is being said about the War on Terror with the recent withdrawal from Afghanistan. For years to come it will be analyzed by politicians, journalists, military leaders and scholars.

I am no stranger to the War on Terror. I saw the devastation firsthand as an army staff lieutenant colonel working in the Pentagon on Sept. 11 when American Airlines Flight 77 slammed into the building. As our nation went to war, I had the privilege of leading the men and women of the 101st Airborne in tours in Iraq and Afghanistan, and later as a brigadier general in Afghanistan during the surge of 2009-11.

I witnessed the valor, courage, sacrifice and resilience of frontline soldiers. The ravages of combat were also evident: wounds, visible and invisible, by bullets and bombs. For far too many, the war did not end on the battlefield.

As chief executive officer at Wounded Warrior Project, I now serve post-9/11 wounded warriors. In this role, I have a very close connection—personally and professionally—to the events that unfolded in Afghanistan and Iraq since our organization’s founding in 2003.  As a veteran that served in Afghanistan alongside brave men and women, I understand how troubling recent events can be.

My message to those veterans is this: You are not alone. Your service and sacrifice are not forgotten. You fought bravely for our country, for the vulnerable and for each other. You continue to be a beacon of hope around the world and at home. You are leaders in our communities and continue to make a difference every day.

Our gratitude as a nation cannot end simply by thanking these men and women for their service. It must be judged by our deeds, not our words.  While countless veterans are thriving across America, there is still a growing need for those who need our help and there are many ways we can meet those needs.

More than 3 million American men and women have served our country in the past 20 years, and over the course of the War on Terror, over 7,000 service members gave their lives. A June 2020 report showed nearly 1.5 million veterans have reported a service-connected disability. The same report showed that post-9/11 veterans had a significantly higher rate of service-connected disabilities than veterans of other conflicts even after considering differences in demographics and social characteristics.

Adding to the concern, a recent study released by Brown University showed that over 30,000 post-9/11 active-duty personnel and veterans have been lost to suicide. That is 1.5 times the rate of suicide in the general population when adjusted for age and sex. The same study noted that the actual number of suicides among post-9/11 service members could be much higher than the records would indicate.

Many wounded, ill and injured veterans (and their loved ones) struggle with isolation or loneliness. Let’s rally the community to support them and be the friends and neighbors they need. Together, we can push back against the stigma of receiving mental health care and support them along their journey. Seeking help builds resiliency and sets an example for fellow veterans.

It’s not just the mental health of veterans that demands our attention. According to our Annual Warrior Survey, almost all those responding (95 percent) indicated significant physical injuries during military service. Seventy-one percent reported being exposed to environmental hazards, such as chemical warfare agents, ionizing radiation, burn pits, or other potentially toxic substances during their military service.

For the veterans struggling to receive their benefits, become an advocate for them. Get engaged and call upon Congress to pass critical legislation that can improve or even save lives.

Economically, the challenges continue, especially this past year. The COVID-19 pandemic caused more than two in five warriors responding to the WWP survey to face unexpected economic challenges. Almost one-third reported they expected to run out of money when the survey was administered in May 2020. The unemployment rate among all post-9/11 warriors jumped to 16 percent at its peak in 2020.

Encourage your employer or businesses you support to hire veterans and invest in their training and mentorship.

Regardless of how we feel about a war, we owe our veterans a debt of gratitude. Their lives have been forever changed—and their children, their families and future generations are affected as well.

I encourage all citizens to support community, nonprofit and faith-based organizations that provide critical programs and services at no cost to veterans. Volunteer with these organizations to learn more about the resources and care these men and women need most.

We should all strive to empower warriors and foster the most well-adjusted generation of veterans in U.S. history. We can only do that by continuing to support their growing needs after service. The greatest casualty is being forgotten—and we must never forget.

If you are a veteran struggling with thoughts of suicide, call the Veterans Crisis Line at 1-800-273-8255 and press 1. For information about resources available from Wounded Warrior Project, visit woundedwarriorproject.org or call Wounded Warrior Project’s Resource Center at 1-888-997-2586. You are not alone.

Lt. Gen. (Ret.) Michael Linnington is chief executive officer (CEO) of Wounded Warrior Project® (WWP).  Prior to joining WWP, he was the first permanent Director of the Defense POW/MIA Accounting Agency (DPAA), following his retirement from the U.S. Army. Linnington served as the Military Deputy to the Under Secretary of Defense (Personnel and Readiness) from 2013 to 2015 and as Commanding General, Military District of Washington and Commander, Joint Force Headquarters-National Capital Region from 2011 to 2013. Linnington was also Commandant of Cadets, United States Military Academy, West Point, New York, where he graduated from in 1980.

The views expressed in this article are the writer's own.

Click Here to Go Back to Project Advocacy News

Click Here to Go Back to the Government Affairs Page