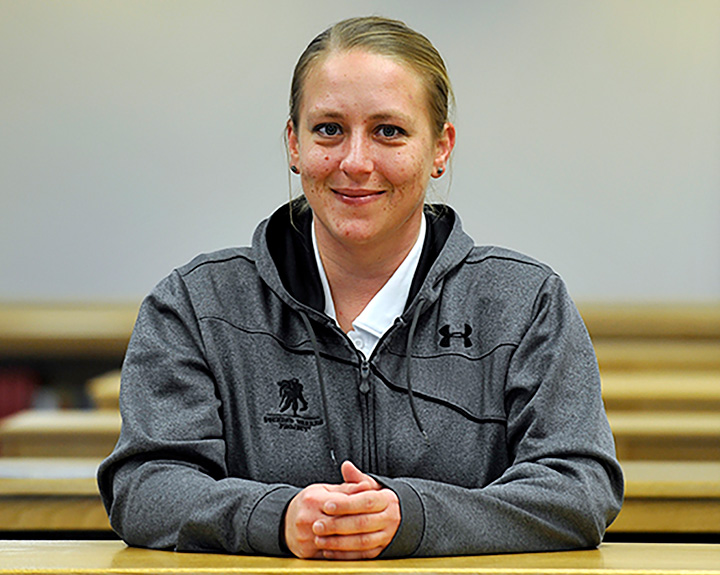 Angie Peacock joined the U.S. Army in 1998 because she wanted a job with meaning that empowered her to help others. When she deployed to Iraq in 2003, just after the initial invasion of Baghdad, her role was to set up and maintain the communication lines for her unit.

“There was danger constantly,” says Angie. “I didn’t know day-to-day if I was going to make it back.”

While in Iraq, she came down with a mysterious illness that caused her to lose 40 pounds and eventually be medevac’d out of the country. But the day after she got to the hospital in Germany, her platoon’s convoy was hit by an improvised explosive device.

“I felt guilty that I wasn’t there,” says Angie. “And I felt shame because I didn’t get wounded like that. I felt like I wasn’t a real soldier because I didn’t get medevac’d out for a real reason.” Angie sought help from the psychiatry team at the hospital, but the help they provided was in the form of prescription drugs. By 2006, she was on 16 medications to combat her post-traumatic stress disorder (PTSD). That year, she attempted suicide more times than she can remember.

The next ten years of her life, she felt numb. She went through rehab four times to try to get off her prescribed medications. But she also found Wounded Warrior Project® (WWP).

“I got invited to an alumni summit in San Antonio,” says Angie. “I remember a WWP staff member came over and talked to me. I said, ‘I don’t belong here, I only have PTSD.’ And he said, ‘Don’t you ever say that again. PTSD is just as real as losing a leg. Some guys think losing a leg is easier than PTSD because that part is gone but their head is okay.’”

As she was invited to more and more events with WWP, she found she was able to help other warriors — fulfilling the need for purpose she’d had since joining the Army many years before. She also started going to college and founded a student veterans organization at her school. In 2015, she was presented with the George C. Lang Award for Courage by WWP, which recognizes a warrior who is a humble yet unyielding behind-the-scenes advocate for veterans.

Now, armed with her master’s degree in social work, she hopes to help as many veterans as possible. She’s also off all of her medications and shares her story to advocate for prescription drug reform and overcoming PTSD.

“Recovery is not always just about you,” says Angie. “It’s about helping other people who are suffering and can’t quite articulate the way they’re feeling. If you can do that, you don’t know whose life you’re going to touch.”