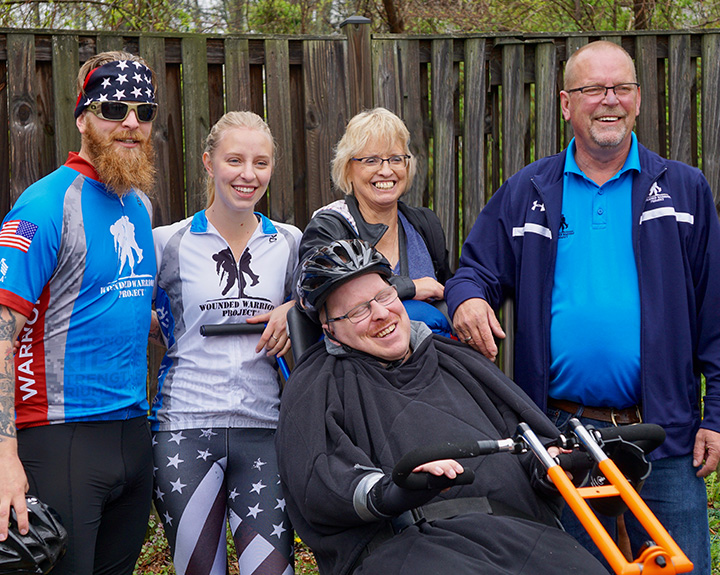 “Without Wounded Warrior Project, I think Erik would sit at home a lot more, watching tv and being bored and depressed. Instead, he feels like he can contribute to the world again.”

For Christine and Gordon Schei, the road to becoming caregivers started when their son, Erik, enlisted in the United States Army shortly after the 9/11 terrorist attacks. Following in his father’s footsteps, Erik became a combat engineer. In 2005, while on a mission during his second deployment to Iraq, Erik was behind the .50 caliber machine gun of his Humvee while fellow engineers repaired the roadway. He was the sniper’s first and only target.

“It was just one shot,” Gordon explains. “There was no big firefight.”

The sniper’s bullet pierced Erik’s helmet and brain near his right ear. By the time his family arrived at Walter Reed Army Medical Center in Maryland, he was lying in a hospital bed with his skull partially removed. Doctors saw little hope for his future, but they left the decision up to Christine and Gordon. They chose life.

For Christine, transitioning roles from mother to caregiver wasn’t easy. Erik is bound to a wheelchair because of the injury, which severely limits his ability to move and speak. He relies on Christine and Gordon to help with every aspect of his life, including eating, bathing, transportation — even using the bathroom.

While Erik needed constant support, he wasn’t the only family member who needed Christine and Gordon’s attention — they had a five-year-old daughter, Anneka, and a teenage son, Deven, in the house as well. To make matters worse, a few years after Erik’s injury, Deven joined the Army and was badly injured. While in Afghanistan in 2010, he was hit with four 80mm rockets that left him with severe injuries to his legs and back, shrapnel wounds all over his body, and a traumatic brain injury.

Thankfully, the Schei family found help and support through Wounded Warrior Project® (WWP) early in their journey with Erik, so when Deven was injured, they knew who to call. At first, they just wanted to find their son; somehow the Army lost track of Deven during his trek from the battlefield to a hospital in Germany. “I don’t know who they called, I don’t know whose contacts they had, but they updated me exactly where he was and how he was,” remembers Christine.

By that time, having their stress and anxiety relieved by WWP was nothing new. Christine and Gordon had been involved with the organization for many years and grew to become more confident, less-stressed caregivers thanks to the relationships they made along the way. “Meeting other caregivers who were going through the same things was important,” says Christine. “We shared our stories, cried with each other, and supported each other. Sharing information and educating each other on what’s available to help us and our warriors makes life easier.”

The Scheis are also involved in the WWP Independence Program, which pairs severely injured veterans with specialists who ease them back into the community and help them re-learn certain skills. While Erik works toward independence, Christine and Gordon get a much-needed break.

“Sometimes you need to clear your mind,” says Christine. “And not worry about changing a diaper, feeding someone, shaving someone, or having to make a phone call to the VA. Just have some peace and quiet and recharge the battery, so you can go back with a positive mind and tackle the next challenge.”

Under Christine’s and Gordon’s loving care, Erik has made incredible progress — much more than his doctors originally thought possible. But he still needs round-the-clock care, and Christine and Gordon are still right by his side. So is WWP.

“Wounded Warrior Project helps Erik look forward to the future,” says Christine. “It creates happiness for him. And he sees that nobody is giving up on him.”