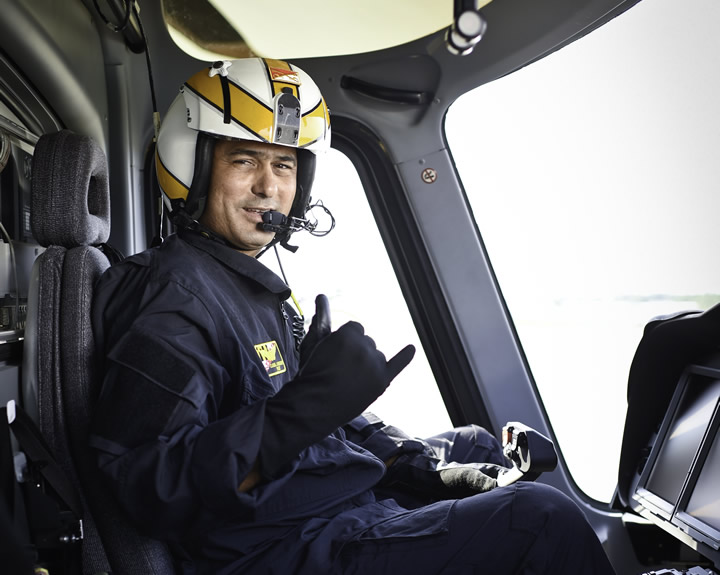 The paradox of being a warrior is to personify the military’s power while serving as peacemaker.

That was Claude Boushey’s life for 25 years in the United States Army, a role he’s now reprising as a Peer Mentor for Wounded Warrior Project® (WWP).

“The purpose of the military is to train for war and then be in war,” says Claude. “Now I use that same training to help my fellow warriors fight inner struggles and find peace.”

Claude wasn’t flying the OH58D “Kiowa Warrior” helicopter that crashed in Iraq on June 13, 2004. He was in the left seat, operating all systems, staying focused on the switches and sensors.

“We were low and slow, and that’s when the pilot said to me,‘Claude, something’s wrong.’ I looked up, buzzers sounded in my headset, the rotor dropped off, and we hit the ground quick and hard.”

The impact shattered and compressed Claude’s vertebrae and compromised 80 percent of his
spinal canal.

Fifteen months after the crash, Claude received approval to fly again and accepted another deployment to Iraq, serving from July 2006 to October 2007.

“Emotionally, it was great to get back to Iraq, because that’s where I was removed from. If you have something you need to fulfill in life, you’ve got to fulfill it,” Claude says.

When Claude retired from the Army in 2008, he sought a way to stay connected with his fellow warriors. His search led him to WWP.

“WWP helped my family and me concentrate on the things we can do instead of things we can’t do,” says Claude. “We’ve received nothing but five-star service from them.”

Claude says he knew others would travel down the same lonely road of despair, frustration, and anxiety he traveled. Helping them avoid those struggles became Claude’s new mission.

“Human beings weren’t designed to be shot at, or blown up, or burned, or to deal with watching their buddies die. Everyone I mentor is unique, but they all have one thing in common: their hearts and minds are reacting to abnormal experiences.”

His message to those he mentors at WWP: welcome to the new you.

“It took me a long time to finally realize this is my body. This is what you’ve got. You’re never going to be the same surfing, marathon-running athlete you were before. But you’ve got your life; be happy with that. Focus on the can, not the can’t.”

Today, Claude serves as a civilian helicopter pilot for the Maryland State Police, performing search and rescue missions, maintaining homeland security, and helping capture criminals. Regardless of the good he does professionally, he remains a passionate advocate for helping fellow wounded veterans.

“I know what it’s like to be in a hospital bed, unable to move, to be carried, pushed in a wheelchair, struggle to stand, and struggle even more to step. Recovery is an emotional roller coaster ride. Often, warriors don’t want to reach out for help. That’s why I make it a point to reach out to them.”

After all, according to Claude, “Peace of mind is a lasting peace worth fighting for.”