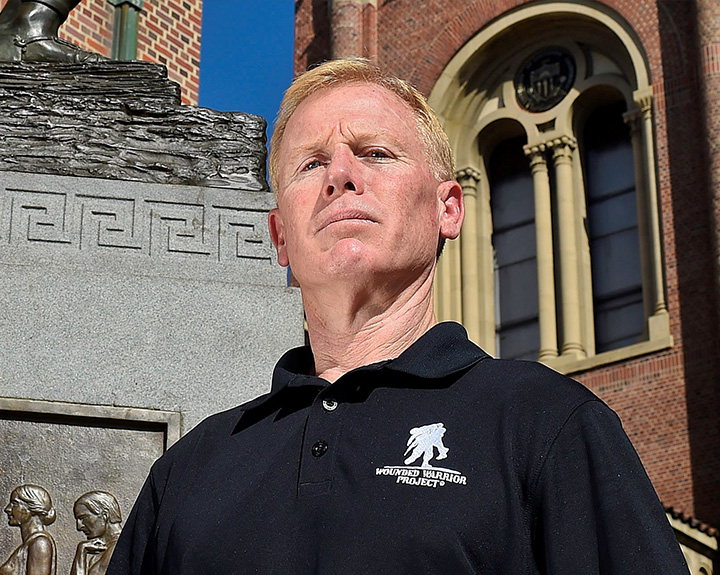 “Wounded Warrior Project has helped empower me; helped me move forward in my life. They give me the support to connect with other combat veterans who are going through the same things I am. It’s a good way for me to stay connected, stay grounded, and keep my PTSD under control.”

Dan Smee joined the U.S. Army as a medic in 1983, served his four years, and then went back to living a normal civilian life. But after 9/11, he felt he had to do something to help — so in 2002, he joined the National Guard. They put him in the same job he’d had 14 years earlier, but this time, his combat medic training would truly be put to the test.

On November 10, 2004, Dan was among the first on the scene when an improvised explosive device detonated under the lead vehicle of his convoy. His platoon sergeant, Mike Ottolini, made the ultimate sacrifice for his country that day. Knowing there was nothing he could do for Mike, Dan went to treat Sergeant Nevins, who had also been badly wounded. But after he came home, Dan couldn’t get the memories of that incident out of his mind.

“For years, I carried the images of Sgt. Nevins in my head, half in and half out of his vehicle,” admits Dan. “It was eating me up, and I always wondered if he blamed me for not being able to save his leg.”

Post-traumatic stress disorder (PTSD) took over, and Dan felt empty for years. He tried drinking away his problems, but at the bottom of a bottle he only found more problems. Then he found Wounded Warrior Project® (WWP). One of the first WWP events Dan attended was the 2010 Courage Awards — where Sgt. Nevins was one of the featured speakers.

“When Sgt. Nevins was presenting on stage, he asked me to stand, shared our story with the audience, and told them I was the man who saved his life,” remembers Dan. “There wasn’t a dry eye in the house.”

Sgt. Nevins’ public forgiveness was a major turning point for Dan. He dedicated himself to helping other veterans overcome the invisible wounds of war, and ultimately earned his master’s degree in social work from the University of Southern California in 2014. Since his goal was to help other warriors, he knew exactly where to start his career to have the greatest possible impact — the Department of Veterans Affairs (VA).

“In an interesting, almost surreal twist, I now occupy an office next to the one where I first sat in 2005 when I came to the VA for help with my PTSD,” says Dan. “Social workers are the gatekeepers to care; a good one can change the course of a veteran’s life. And my experiences gave me the drive and determination to become a social worker who would never let a fellow veteran down.”