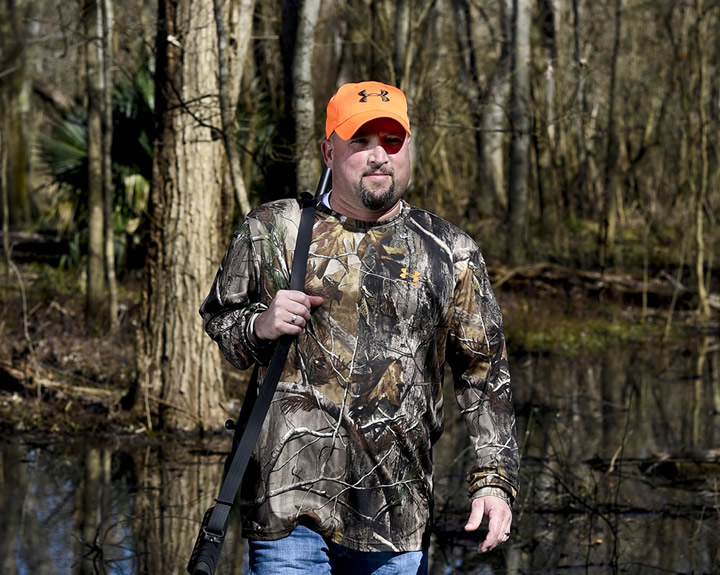 Imagine if those injuries were to your brain. Imagine the violent transfer of energy through your brain’s 100 billion neurons, damaging the delicate structure, with no way to release the pressure.

“It was April 5, 2005. We were on patrol, traveling south of Baghdad, with four vehicles in our convoy. Suddenly, about ten feet behind me, there was an explosion.”

The improvised explosive device (IED) tossed Deron, the turret gunner on the Humvee, around like a rag doll. Slammed unconscious, he was thrown down into the turret.

“We had training in basic first aid, so we all took care of each other. I wasn’t knocked out for long, but when I woke up it felt like my head just exploded. Mine was the onset of a severe concussion, whiplash, ringing in the ears, headache. It wasn’t until later when doctors discovered I had a neck injury.”

That “discovery” took weeks – but not before Deron went back out on missions.

“I continued to have severe headaches and light sensitivity. I just kept going to the doctor and let them evaluate and document everything because it was becoming unbearable.”

Finally, an MRI revealed damage to Deron’s spine. The Army sent him back to the US for surgery. Doctors at Brooke Army Medical Center in San Antonio, Texas diagnosed Deron with a traumatic brain injury (TBI) in December 2006.

“I’ve had a total of seven cerebral surgeries since the injury incident, and I’ve had probably close to a hundred procedures to my head and spine. I was in the hospital off and on for 16 months.”

Like a lot of soldiers, Deron says he doesn’t complain because he’s still alive. He respects that others have suffered what he considers a much worse fate.

In addition to TBI, Deron struggles with nightmares and other issues from post-traumatic stress disorder (PTSD). He still endures headaches, light sensitivity, and trouble with cognitive functions. And although Deron sometimes has difficulty with short-term memory, there is one particular event he says he’ll never forget.

“I had been gone for almost a year,” Deron says, remembering the first time he came home. “At the airport, my kids weren’t allowed past security because they were too young to have ID cards. My wife met me at the gate. As we walked the hallway to security, my little girl saw me and took off running toward me. The guard tried to grab her, but just like a little running back, she juked him, shrugged him off, and kept going. Nothing was going to stop her. She jumped into my arms, and we were all crying, and she just kept saying ‘I love you, daddy’ over and over.”

Even for a Purple Heart recipient like Deron, nothing beats the feeling of being a hero to his children.

But he says he often spends time thinking about friends he lost in combat and how they sacrificed themselves for their country.

“I am inspired by Vietnam vets who paved the way for soldiers like myself so that we’re not ignored and mistreated like so many of them were when they returned from war.”

He says that’s why he acknowledges his Alive Day with a prayer.

“I give thanks for being alive, and I pay tribute to all the patriots who made things possible for my family and I to enjoy.”