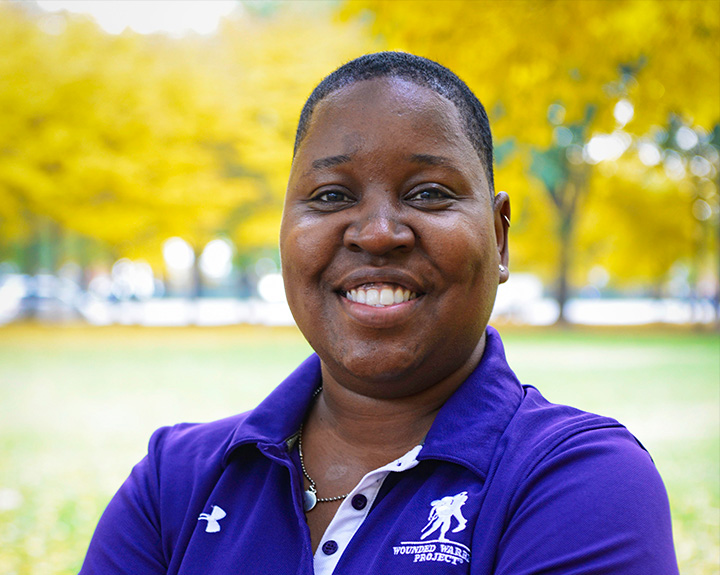 “Wounded Warrior Project really kickstarted my recovery, both physically and emotionally. With WWP, I have been more places and done more things than I ever thought I could.”

Donna Pratt joined the U.S. Army in 1990 to realize a selfless purpose — protecting her country. She left the military in 1998, but a few years later, 9/11 called her to service once again, and she re-enlisted in the Army.

She deployed to Iraq in 2008 and worked in the armory, where she maintained weapons and equipment. As an expression of her devotion to her job and country, she prayed over the arsenal and her fellow soldiers before each mission — even while in severe pain due to foot and ankle injuries. When several soldiers in her unit were injured by an improvised explosive device the day after she was sent home for medical treatment, she became overcome with survivor’s guilt, a form of post-traumatic stress disorder (PTSD).

“It tore me apart. The one time I wasn’t there, someone got hurt,” says Donna.

Back stateside, Donna not only had to deal with the emotional pain she was feeling, but also her own physical injuries. Multiple surgeries were required to repair damaged tendons, torn ligaments, and fractured bones in her feet and ankles. After two years in a wheelchair, “I was so depressed I wanted to quit on life,” Donna says.

That’s when she learned about Wounded Warrior Project® (WWP) and was invited to a Soldier Ride® in Jacksonville, Florida. But Donna was unsure if she could ride a bike because she was in a wheelchair at the time.

“I was like, ‘Soldier Ride? I can’t ride a bike,’” says Donna. “But I was told, ‘You know what? Just come on out. We’ve got something for you.’ I had never heard of a handcycle before.”

Donna embraced the experience and met people who were facing similar challenges.

“That one Soldier Ride didn’t just save my life, but it probably saved others too,” says Donna.

Donna has stayed involved with WWP and participated in many events over the years. As she’s continued to progress in her recovery, her new mission has become helping and encouraging other warriors.

“It’s such a great honor to be able to help so many people,” says Donna. “Just to know that my story can help somebody else, can bring them out of the ditches like Wounded Warrior Project did for me – that helps me and keeps me going. That’s something to wake up for every day.”