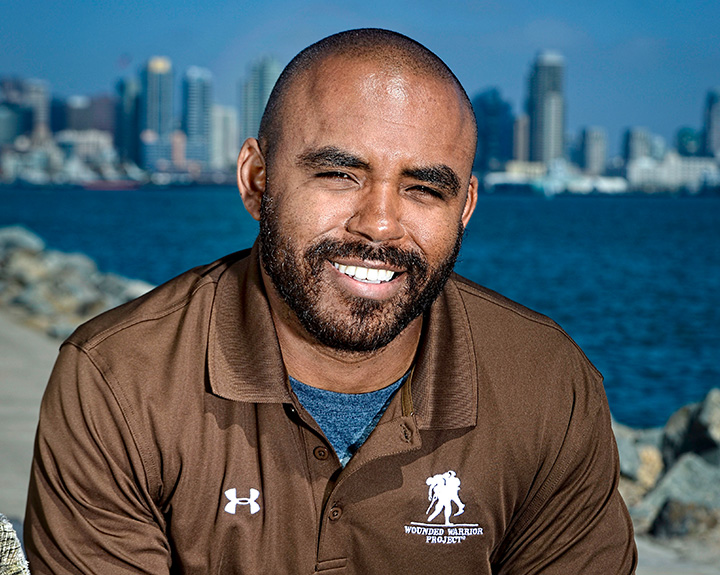 Nothing is impossible. Eric DeLion realized this standing at 14,505 feet on the summit of Mount Whitney, the tallest mountain in the contiguous United States. He was sick from the altitude and exhausted from the climb, but persistence had paid off. It was not only confirmation of his physical strength, but motivation to continue overcoming the challenges stemming from a traumatic brain injury (TBI) and post-traumatic stress disorder (PTSD).

“They’re both extremely physically and emotionally challenging,” Eric says. “The body can handle more than you think, and mentally, you’ve got to be strong, because whatever the challenge is, it’s not going to go away.”

Eric first developed his physical endurance playing football and basketball in high school. But during his senior year he broke his hand, saw his dreams of playing college ball vanish, and found a different kind of recruiter interested in him: a United States Marine Corps recruiter. Eric liked what the recruiter had to say and signed up. He was in basic training on September 11, 2001.

“They took all the guys from New York and pulled them aside,” Eric recalls. “They told the rest of us to get ready. We were going to war.”

Eric was attached to 2nd Battalion, 1st Marines for the initial invasion of Iraq in 2003. His unit moved as far north as Nasiriyah, living in landfills for weeks at a time and meeting minimal pockets of resistance.  “We did a lot of blowing things up from a distance,” says Eric.

His second deployment in 2004 was not the same. Now part of a rifle company, Eric lost count of all the firefights, incoming mortar rounds, rocket attacks, and vehicles blown up from under him by roadside bombs. The worst was an improvised explosive device (IED) that badly burned one of his buddies. Within a month after his return home, Eric was transferred to a unit that had never seen combat.

Eric began drinking heavily, sometimes reporting for duty intoxicated. His marriage began to fall apart. It wasn’t long before he was diagnosed with PTSD. Two years later, he was discharged from the Marines and spent a year in Sasebo, Japan before returning stateside to San Diego, California.

In 2011, Eric ran into a fellow Marine he had fought with, and the meeting stirred up painful memories and emotions. It put Eric back in therapy, where his doctor did two things that changed Eric’s life. The first was to explain the headaches that plagued Eric since Iraq were caused by a TBI, likely due to an accumulation of concussions from IED explosions. The second was to put Eric in touch with Wounded Warrior Project®(WWP) and a Physical Health & Wellness coordinator.

“My first event was a Tough Mudder,” Eric says. “Ever since then I’ve done just about every Physical Health & Wellness event WWP has,” including his climb up Mount Whitney.

For Eric, finding strength began with WWP and the knowledge that he is not alone. “For all those who are going through what I went through, know that there’s light at the end of the tunnel. There are always people out there who care. All you have to do is find them.”