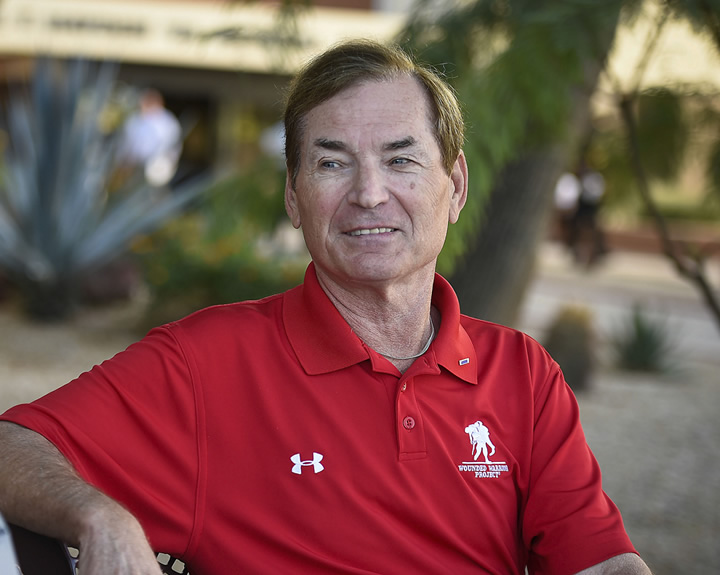 “Wounded Warrior Project has shown me that no matter what you’ve been through, you can have a future, and it can be good.”

Frank Sonntag grew up on military bases across the country because his father served in the U.S. Navy. When Frank turned 18 in 1970, he decided it was his turn to serve — so he joined the U.S. Army. He served on and off in a combination of active duty and reserve units until he settled into an active duty role training other soldiers in 1998.

In 2003, Frank was sent to Balad, Iraq, where insurgents shot mortars into his base so often the soldiers stationed there started calling it “Mortar-itaville.” On March 4, 2004, as Frank was walking across the base, one of those mortars exploded nearby. Frank felt the slap of the shock wave on his face and dropped to one knee. Since he didn’t get hit with shrapnel, Frank thought he was ok and went about his day without seeking medical treatment. But over the next few years of his life, Frank came to realize he did not come away from that blast unscathed.

“I would have nightmares all night and headaches all day,” says Frank. “You can’t function that way. It was one of those cases where I wanted to be macho and try to fight through it. I was stubborn. The bottom line is I should have gotten help years earlier.”

Frank lived that way for a long time, and his quality of life sunk so low that by the time he walked into a hospital for treatment in 2008, he was on the brink of suicide. Doctors not only found a head injury, but also internal damage on the right side of his body and a blocked carotid artery and kidney.

Frank underwent two surgeries, but his physical recovery did not provide peace of mind — especially as he retired from the Army and left the military he’d been tied to almost his entire life. Thankfully, that’s when he found Wounded Warrior Project® (WWP).

WWP helped Frank prepare for retirement by filing for the disability benefits he’d earned, ensuring he wouldn’t have to stress about his finances. He also attended a three-day warrior summit with a group of other veterans who helped him realize he wasn’t alone.

“Those three days changed my whole life,” says Frank. “I cried for a day because I found people who knew exactly what I had been through. It showed me there was hope. And I knew I could have a better life than I ever thought possible.”

Frank’s experience was so powerful, he dedicated himself to counseling and mentoring other warriors to ensure they never feel alone — and to help them realize they, too, can have a great life.