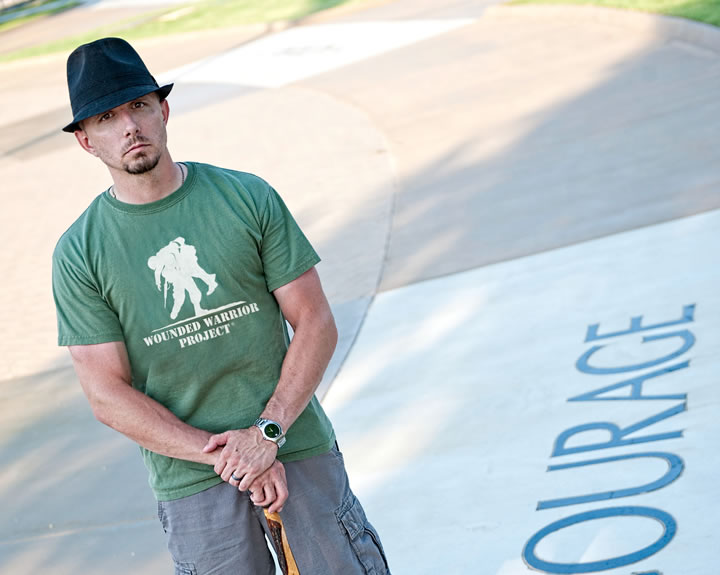 Jeffrey Adams was only four credit hours away from earning a degree in mechanical engineering from Louisiana State University (LSU). But instead of walking across the graduation stage wearing a cap and gown, he chose to walk the roadsides of Baghdad, Iraq, wearing helmet and Kevlar, and looking for improvised explosive devices (IEDs).

He found one. Or rather, one found him.

“We saw something that looked like a wheel, and we reacted to it as though it were an IED,” says the former combat engineer in the Louisiana Army National Guard. “We were more than 300 meters away from it, and I was looking through binoculars for wires, antennas, or anything indicative of an IED. We didn’t see anything, so I started to turn, and I blinked. Then I found myself sitting on the ground, missing a leg.”

The enemy had used the distant object as a decoy, blowing up a land mine 10 feet from Jeffrey’s location.

“My first thought was it looks just like it does in movies likeSaving Private Ryan,” says Jeffrey. “My second thought was, ‘Why don’t I get back in the vehicle before I get shot like Forrest Gump.’ Then my third thought was, ‘Dude, why are you thinking about movies? You have no leg!’”

Nearly 30 surgeries later, Jeffrey ultimately made his way across the stage at LSU to pick up his diploma. He even delivered the commencement address during the engineering graduation ceremony.

Jeffrey traces his association with Wounded Warrior Project® (WWP) back to his first days at Walter Reed Army Medical Center.

“I remember WWP coming to see me,” he says. “They came in, handed me the WWP backpack, and said, ‘Since you don’t have anything on you, this is a care package. If you need anything, let us know.’ That was my first introduction to WWP. It’s an association that has only grown stronger. Anybody who comes to your aid, you owe them a debt. That’s how I feel about WWP. Anything they need, I’ll be there for them.”

Jeffrey has also been there for his fellow warriors as an outspoken advocate for veterans’ economic empowerment. He knows that injured warriors are rendered stronger – not weaker – by their experiences.

“Don’t look at us as having a disability,” he says. “Look at what we’ve been through and see the advantage we have because we’ve been mentally toughened. Some of the things a lot of us have to do just to get out of the house in the morning are tougher than anything most people will have to do the entire day.”

Jeffrey has lived this strength, working as an engineer for The Boeing Company, and now, for the U.S. Army on Redstone Arsenal in Huntsville, Alabama.

As for his daily life, Jeffrey says, “It’s just me, my wife Katie, our baby daughter, a dog, and a cat. It’s nice and laid back. Pretty normal.”

Now that Jeffrey has found his new normal, his advice for other warriors is simple: “If you can change something, do it. If you can’t change it, then accept it and move on. It’s easier said than done. But things are what you make of them. You just have to keep moving forward.”