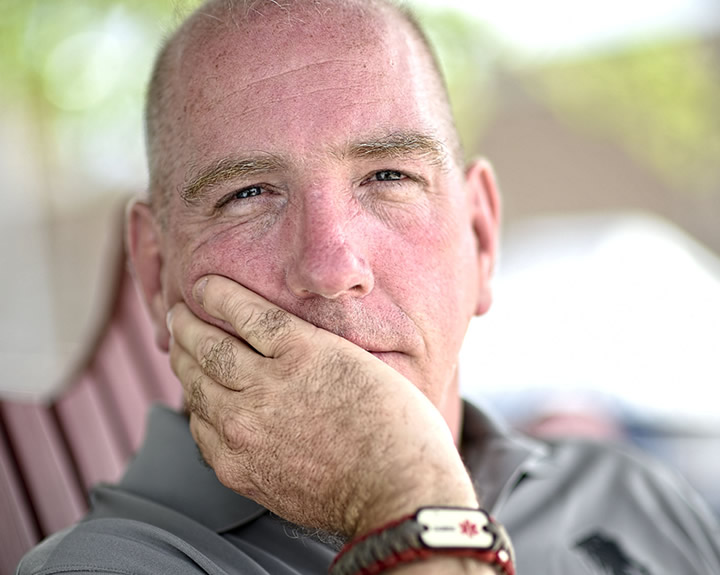 A few years ago, United States Army Veteran Jim Mylott took a long, hard look at himself and saw a big hole where his life used to be. But it didn’t look like a hole; it looked like a mountain too formidable to climb.

“Thoughts of suicide are real for the lost warrior,” says Jim. “It’s something nobody wants to talk about, but we must. We need to talk about the negatives in order to reach the positives. If we can get just one person to put that gun down, change their mind, and choose life, then it’s all worth it.”

According to the latest statistics from Veterans Affairs, the United States loses 22 warriors to suicide every day. Jim admits that he came close to being a statistic, and he credits Wounded Warrior Project® (WWP) for saving his life.

“Before WWP, I used to have severe anger issues. It was destroying my life, my marriage, and my relationships. I would never open up and talk about it until I went to a Project Odyssey® event. I came back a changed man, leaving a lot of my issues buried there.”

Jim doesn’t pretend it’s easy to open up and reveal what’s going on inside the mind of a warrior struggling with post-traumatic stress disorder (PTSD). But he insists it’s a life-changing choice that must be made. He has the mental scars to prove it.

In July 2003, in Ad Diwaniyah, Iraq, Jim’s checkpoint was rammed by a truck rigged with explosives. As the truck was barreling toward him, one of Jim’s soldiers threw him into the cab of a nearby Humvee – saving Jim’s life, but absorbing the full impact of the truck’s collision. He died in Jim’s arms, having bravely sacrificed his life for his squad leader.

“I woke up in the hospital with most of my memory gone,” says Jim, “but I still had survivor’s guilt. In my mind, his is the last face I see before falling asleep and the first one I see when waking up. It tormented me.”

Jim spent the next two years in the hospital. Multiple doctors told him that he’d never walk again, but Jim was determined to get out of his wheelchair and thrive without crutches. With time, he stood up and proved everyone wrong.

Yet, he was losing the battle within.

“When you throw PTSD and traumatic brain injury (TBI) together, I liken it to having cancer of the soul,” says Jim. “It was like I was lost in the woods.”

One day, while screaming at his young daughter for putting her shoes on the wrong feet, Jim finally realized he needed help.

“I was in full-on drill sergeant mode,” says Jim, “When my daughter reached out her hands, touched my face, and said ‘Dada, please don’t yell.’ That’s when I knew something had to change. I discovered WWP, and now I’m in the clear, handling things better, coping better, and living better.”

Jim has since rebuilt his relationship with his wife and daughter, and his new lease on life led him to train as a Peer Mentor for WWP. He says there’s a new war to fight – the war to save the lives of the 22 veterans each day who commit suicide.

“Deep within, the warrior spirit is that of a survivor. I survived, and everyone struggling with PTSD, TBI, or any other war injury can survive, too. I’m not dying of PTSD; I’m living with PTSD. I choose to live with it. I choose to talk about it. Every time I can talk about it and talk with another warrior about PTSD, I heal a little more. When you reach out to another warrior, your survival instincts kick in, and you say to yourself, ‘I’m better than this. I can make it.’ When a warrior tells me he’s ready to quit, I say, ‘Okay, go ahead, quit … tomorrow. Today you live.’”