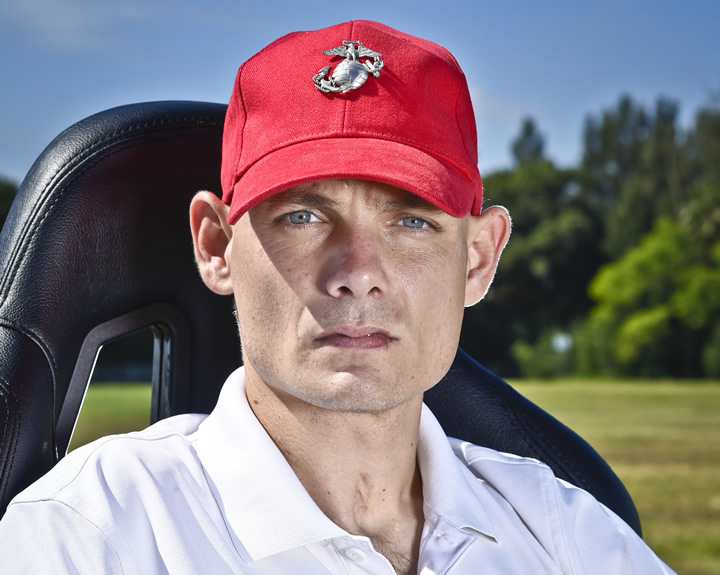 “Wounded Warrior Project has been great at helping me get integrated back into my community. They provided the platform, connections, and training to be successful running a nonprofit. They have really been excellent at providing me the opportunities to succeed in life, period.”

When Mike DeLancey graduated from high school in 2003, he knew he wanted to enlist in the U.S. Marine Corps infantry. But he waited until January so he could celebrate the holidays at home with his family. “I knew it might be my last holiday with them,” says Mike.

By the 2004 holiday season, Mike’s unit was already in Afghanistan. He returned home safely and deployed again just nine months later — this time, to Iraq. On September 1, 2006, after Mike’s team had spent all night looking for improvised explosive devices (IEDs) in Haditha, Iraq, shots rang out as they were walking back to base. Mike was hit by a sniper’s bullet that entered his left shoulder, hit three of his vertebrae, injured his right shoulder, and splintered into his lung. He flatlined five times at Al Asad Air Base before he could be stabilized enough to go to Landstuhl, Germany for more surgery, and eventually back to the U.S.

After more than 40 days in the intensive care unit at Walter Reed Army Medical Center, Mike was transferred to the Tampa VA hospital to begin his rehabilitation. Because of the damage the bullet did to his back, he is paralyzed below his T5 vertebra. “At that point, I think I was just grasping for straws about some sense of normalcy,” remembers Mike. “I was wondering, ‘can I still do this, can I still do that?’”

Thankfully, Mike was mentored by other warriors at the Tampa VA who had been down the same path and could teach him how to still do the things he loved. Those experiences left such an impression on Mike that he felt compelled to pay it forward and be there for the next group of injured warriors returning home. “I started going back up to the Tampa VA, and I started talking to newly injured people and showing them what was available to them. That’s around the time I found Wounded Warrior Project® (WWP).”

Mike started attending local WWP events with his father, who is his full-time caregiver. They found that getting out of the house and spending time with other warriors and caregivers was a therapeutic way to relieve the stress of recovery. And on one of those events — a Soldier Ride® in Key West, Florida — Mike found a new passion. “I was trying to find a way to get out and get more active,” says Mike. “And they had a hand cycle. When I got on that thing, I absolutely loved it. We ended up going about 70 miles over three days. Now the hand cycle is my favorite way of getting cardio.”

Throughout his recovery, Mike has remained committed to helping his fellow warriors. In 2015, he formed his own nonprofit to allow injured veterans to experience a variety of recreational activities in a safe and reflective environment. “I want to motivate my fellow warriors to recover from their injuries as best they can and to never give up. Your Alive Day isn’t the day you almost died; it’s the day you chose to live.”