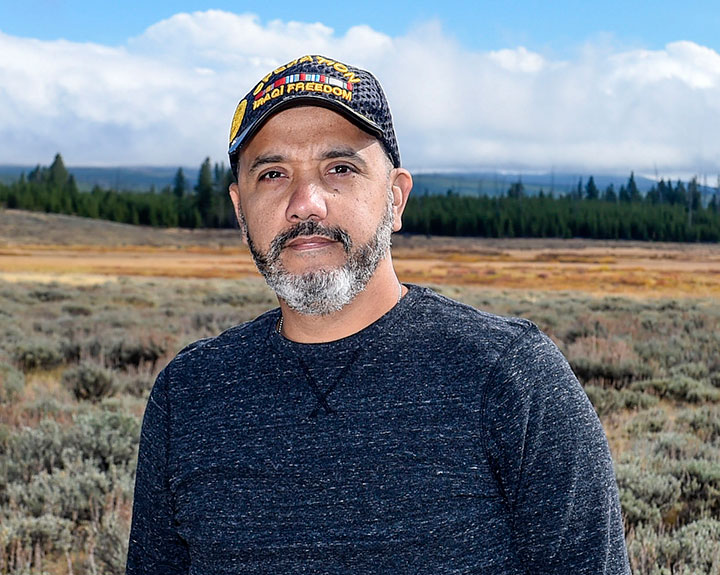 Paul De La Cerda walked into the Army recruiting station and told the recruiter, “I want airborne, infantry.” The recruiter questioned Paul’s choice because his 120 score on the ASVAB test (Armed Services Vocational Aptitude Battery) meant he could pick any job he wanted.

“I said, because that’s what I want. I didn’t have to get Infantry. I could have picked any job I wanted. I wanted Infantry. That’s what I always wanted since I could remember. I asked how soon could I leave? So, two weeks later I’m gone.”

After basic and airborne school, Paul was stationed at Ellington Air Force Base in Houston.

“I went to a special unit. The unit was a LRSD airborne unit. Our mission was to do reconnaissance and long-range surveillance and report back to the major commands. After a year with them I requested to be re-assigned overseas where they ended up sending me to another airborne unit in Italy, SETAF. We were considered the ready reaction force in Europe. Basically Europe’s 911. Anything that goes wrong, we’re the first ones who get called.”

In July 2005, Paul was deployed to Tal Afar, Iraq with the 82nd Airborne. He was sent to a Delta Company to do route clearance operations and foot patrols, clearing the way for re-supply and other units, looking for IEDs and high value targets. On one routine mission, Paul says he had a feeling in his gut that something bad was going to happen. And it did.

“Our vehicle went through some mud and – boom – we got hit. I mean, it just nailed us. All of our crew survived, but a civilian was killed from the blast. We were all knocked out for a while. When I came to, I couldn’t see anything. I didn’t know it at the time, but I suffered a traumatic brain injury (TBI).”

The symptoms didn’t start to reveal themselves until Paul got home from Iraq. He was medically retired from service in 2009.

The doctor wrote up Paul’s narrative summary: Involved in an IED blast, multiple TBIs from jumping, getting knocked out, only to shake it off and return to jumping again.

“When they found out about everything is when they did my scan and found three small spots on the left side of my brain. I finally started proper treatment at the Warrior Transition Battalion at Fort Bragg.”

Today, Paul’s health continues to improve, but he still must manage the lingering effects of TBI.

“I forgot things in my past, I forgot people. I didn’t know who some people were that I had met from a long time ago, just crazy stuff. You forget numbers and sometimes someone would give me directions how to get somewhere and I’d forget them as soon as I walk away. When I forget things, they’re gone. Doctors said I might have an encoding issue. I’m not able to retain the information.”

But as Paul has proved over and over again in his life, he’s anything but a quitter.

“My highlight is my art, and my musical career. I’m playing drums for my wounded warrior band right now, which is extremely rewarding – warriors playing for warriors. And, my concert photography. I’m shooting big shows instead of a weapon. I do it for clubs and certain bands. I meet a lot of important people. That’s why I so enjoy being involved with the Wounded Warrior Project®. As an ex-soldier, I want to give back. And with my connections, it’s like giving a million-dollar ticket.”