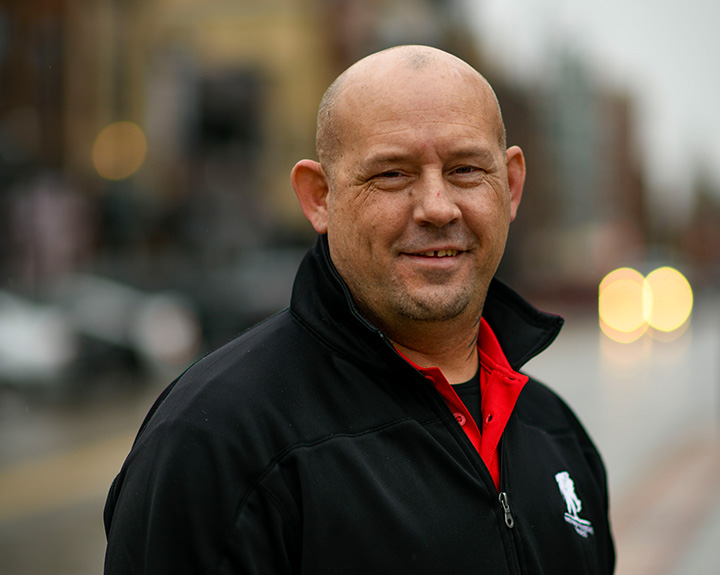 Philip Krabbe’s happiest memories came from the time he spent in the U.S. Marine Corps. “I loved the Marines.” Philip says. “The best part was the camaraderie and the love we had for one another.”

But that brotherhood made the reality of war even more devastating. On May 23, 2006,
Philip lost two of his Marines and an interpreter to a roadside bomb. Not only were they his friends, but as their platoon sergeant, Philip felt responsible. He compartmentalized his feelings and carried on with the mission, but it wasn’t long before he needed prescription drugs to get to sleep at night.

When Philip returned home, post-traumatic stress disorder (PTSD) and survivor’s guilt led him to continue self-medicating with drugs and alcohol. “I was an alcoholic,” admits Philip. “I was a drug addict, too. I tried to cope the only way I knew how, just to be able to function during the day.”

In 2017, Philip found Wounded Warrior Project® (WWP) and, at his very first event, met a fellow warrior named Ray Pizarro. Philip didn’t know it at the time, but that moment would become a major turning point in his life. Ray led Philip through his recovery journey, introducing him to a variety of WWP programs and serving as his support system. But recovery is rarely a straight line. On November 30, 2020, after almost 14 years of substance abuse, Philip nearly committed suicide.

“The depression told me I could end this with one pull of a trigger. But I looked down and saw the word ‘courage’ tattooed on my hand,” remembers Philip. “I promised Ray I would have the courage to survive, that I wouldn’t take my own life. That was the last drink I had.”

After getting sober, Philip worked with the WWP Benefits Service team to get the proper VA disability rating, which allowed him to stop working. Instead, he could focus full time on his recovery by participating in programs like Warrior Care Network®. “It changed my life drastically,” says Philip. “I didn’t know how to explain how I felt; Warrior Care Network helped me better explain what I was going through.”

While trying new programs and therapies, Philip’s participation in the WWP Peer Support program remained constant. Ray was Philip’s Peer Support Group leader, and together they tried to help as many local warriors as they possibly could. Unfortunately, in early 2022, Ray passed away. But instead of falling back into old habits, Philip saw it as a challenge — and an opportunity to regain the sense of purpose he lost when he left the Marine Corps. “I promised him that I would pick up the torch, carry out his mission, and make it my own,” says Philip. “I know this is what I am supposed to be doing. My goal is to talk to anybody who will listen to me. I think that my story is powerful enough that it can hopefully save a life.”