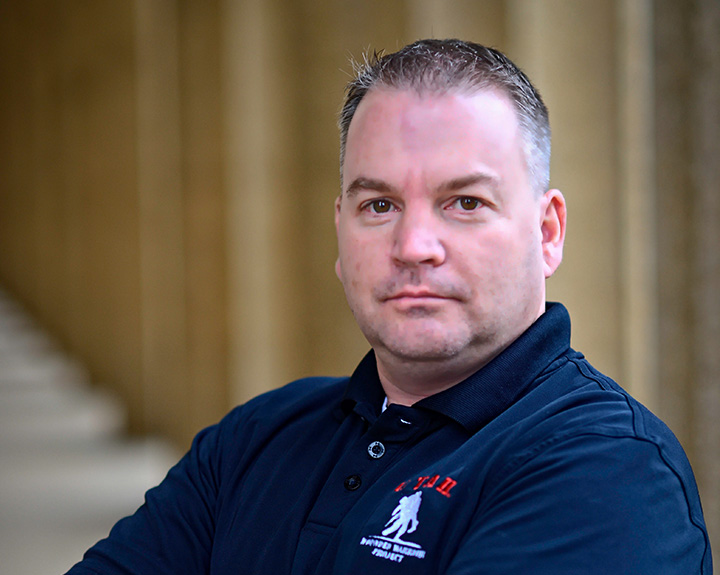 “Receiving a backpack at Walter Reed was the first spark that made me believe I could be whole again. But Wounded Warrior Project is so much more than a backpack. They provide programs and services to get Warriors back out into the world and connect with others who understand their needs. It’s a great resource that continues to help build lives for wounded soldiers and their families.”

Tad Stuart always wanted to serve in the military. The son of a Vietnam-era veteran, he first enlisted in the U.S. Army infantry in 1993. After a break in service in the mid-90’s, he re-joined the Army and worked hard to become a Kiowa Warrior helicopter pilot. But in late 2007, during his second deployment to Iraq, Tad’s helicopter experienced a malfunction over an airfield in Baghdad.

“I knew we were going to crash,” remembers Tad. “I was trying to limit the damage, but I felt the entire aircraft crumble. I never lost consciousness, but I knew my back was messed up. I just didn’t know to what extent.”

Doctors at the hospital in Baghdad discovered Tad suffered complete spinal canal obliteration. Luckily his 12-hour surgery went better than anyone had expected, considering his back was broken in five places. He was flown to Walter Reed Army Medical Center in Bethesda, MD for recovery, but after a week in the intensive care unit, no one knew if Tad would ever walk again. “I could move my feet a little bit, but that was about it. I was in severe pain, and I really had no sensation from the waist down.”

It was a long, hard road, but after nearly three months, Tad was able to walk around his house and do everyday activities without a wheelchair. “When I left the hospital, I told myself I’d never use that wheelchair. And I haven’t. I put it in my garage. I wanted to maintain a positive attitude like the other veterans I met at Walter Reed from Wounded Warrior Project® (WWP). When I saw how they overcame their challenges, I was inspired to overcome mine. Seeing their success proved I can accomplish anything.”

Once Tad removed the barriers from his mind, he plotted a new goal — to get back in the cockpit and fly again. His doctors cleared him medically, but he still had work to do before he would feel comfortable in control of an aircraft again. He credits WWP with helping him overcome those fears. “With Wounded Warrior Project, you belong to something again,” says Tad. “That support helps your mental game. It’s the same brotherhood you share in the military. That’s why I tell other warriors, ‘Don’t give up, believe in yourself, know what you want, and go for it.’”

Tad proved to himself, and to everyone else, that he could fly again. Now, he works as an AirMed helicopter pilot, helping injured people receive emergency medical care. “When you respond to an emergency, you encounter people who are going through the worst moments of their lives, and time is critical — a matter of life or death,” says Tad. “Being successful with each and every rescue is my mission in life, because I remember what it was like to need help, to be in pain, and to be helpless. Brave responders saved my life; now I want to help save other people’s lives.”