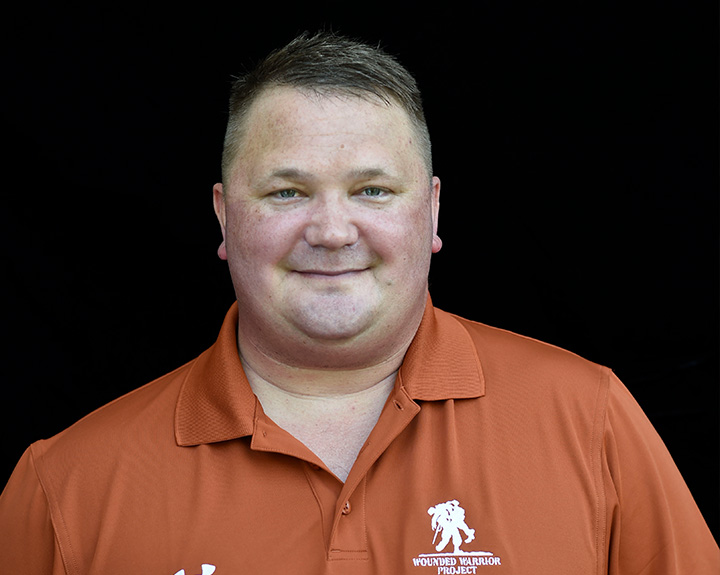 “Without help, I would be divorced and living under a bridge. Wounded Warrior Project saved my life.”

Tom Marcum joined the U.S. Air Force in 1996 expecting to make it his life’s career. Over the course of two deployments to Iraq and one to Kuwait, Tom estimates he was on 250 missions. Yet, ironically, he was injured four times, by four separate rocket attacks, while in a place he was supposed to be relatively safe — inside his base.

“After the last one — which slammed me up against an armory, split my head wide open, and knocked me out — my head simply had enough,” says Tom.

As a result of Tom’s traumatic brain injury (TBI), shoulder injury, and posttraumatic stress disorder (PTSD), he was medically retired in 2012. He felt like he’d lost his purpose and lapsed into a deep depression. That’s when he met Wounded Warrior Project® (WWP).

“WWP actually found me,” says Tom. “They brought me a small backpack with toiletries in it. That was the greatest thing I had ever seen in my life, because it was like someone you have no relationship with actually cares.”

During the course of his long hospitalization, Tom’s conditions and prescribed medications affected his mood and began eroding the relationships he treasured most. Adding to it was the fact that his wife, April, was spending hours driving back and forth to hospitals while operating as a single parent for two young children and trying to navigate the complicated VA benefits system. Feeling desperate and overwhelmed, April decided to attend a WWP caregiver retreat. “WWP saved my family,” says April. “I was tired of crying. They cared. They helped turn the tide.”

As the family got more involved with WWP, they learned about the Independence Program and Tom enrolled. He and his coach set goals and developed a plan to help Tom live as independently as possible. “One thing I really like about the program,” says Tom, “is that instead of just telling you what the program offers, they ask what you need and then help you achieve it.”

For Tom, that meant helping him find a new purpose. During one rehabilitation program, he was introduced to woodworking and found the craft gave him an outlet for expression as well as a form of hands-on therapy. It also helped Tom find an answer to a nagging question; how to give back and help other people. With a lathe, a makeshift table saw, and a sander, Tom began turning scrap wood into hope and fellowship, making yard games for neighborhood families and building furniture for people who needed help. “It gives me a sense of purpose, something I was desperately needing,” says Tom. “I take my time, I work for a couple of hours until I get tired, but I keep at it. And at the end, I get the reward of seeing a smile on someone’s face.”