In July, Wounded Warrior Project hosted a virtual event with the Department of Veterans Affairs (VA) and founding members of the Servicewomen and Women Veterans Congressional Caucus. “Advocacy In Action: WWP, VA, and Congress on Serving Women Veterans,” discussed VA’s efforts and lawmakers’ legislative actions to serve women veterans. Panelists were post-9/11 women veterans, allowing them to speak from both personal and professional experience.

VA’s Women Call Center provides direct assistance to women veterans who are not currently engaged with VA health care and can be reached at 1-855-VA-WOMEN.

“Let me make this point very clear: the benefits and services VA offers — they are yours. You’ve earned them, you deserve them, and VA wants you to take full advantage of them,” said Bradsher.

Kayla Williams also spoke to the lessons learned from her role on the DoD’s Independent Review Commission on Sexual Assault in the Military, where she contributed to a series of recommendations to improve care and support for MST survivors.  VA is undertaking its own efforts to eliminate sexual harassment and assault, recently standing up a Working Group on Sexual Harassment/Assault Prevention and Response which will work to implement a new, comprehensive approach to addressing these issues in VA facilities.

“To survivors of sexual trauma, on behalf of the Department of Veterans Affairs: We believe you, and we believe in you,” said Williams. 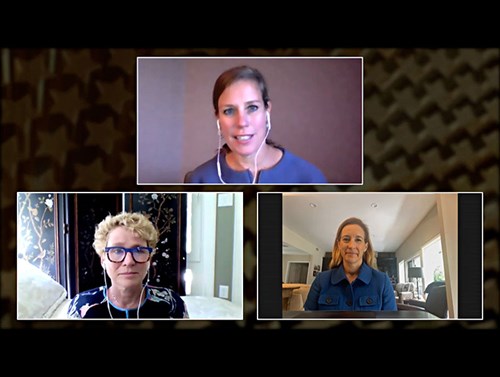 Tracy Farrell, WWP vice president of Connection and Wellness, moderated the second half of the event with U.S. Representatives Chrissy Houlahan and Mikie Sherrill — both of whom helped to launch the Servicewomen and Women Veterans Congressional Caucus in 2019.

Rep. Sherrill stated that, going forward, “Congress really needs to make sure that women feel a part of the veteran community.”

Since its launch in 2019, the Servicewomen and Women Veterans Congressional Caucus has advocated for women by creating bipartisan support for the Commander John Scott Hannon Veterans Mental Health Care Improvement Act, changing the rules of TRICARE to cover 3-D mammogram technology for women, and championing legislation for the Women's Health Transition Training pilot program run by VA and the Department of Defense. Rep. Houlahan said that the caucus is also working on sexual assault prevention and response, housing, STEM and STEAM career path opportunities, and postnatal health care.

“We anticipate that in the next 25 years or so, there will be a doubling of the population of people who are women who are veterans. And so this is a really important population to be focusing on,” said Rep. Houlahan.