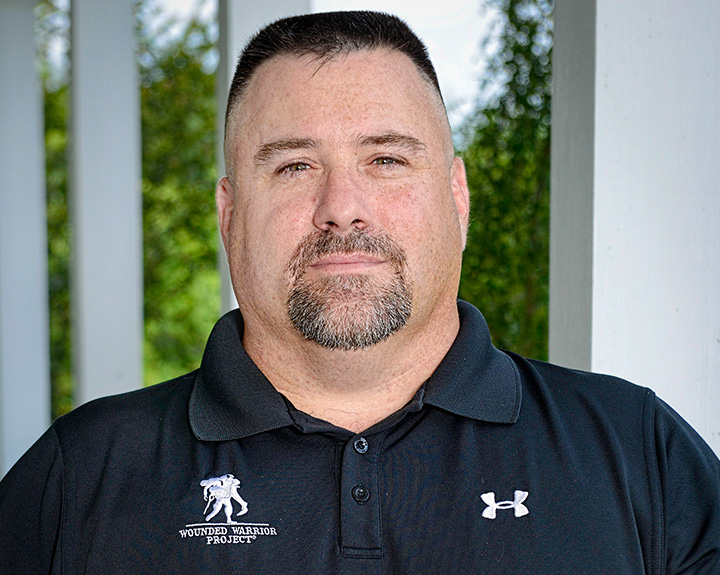 “I thank god every day for Wounded Warrior Project, because without them I don’t know where I would be.”

Joey Hooker was a born leader. It was a trait he learned from his father, a Marine who battled on Korea’s “Frozen Chosin.” In high school, Joey led his football team as a star defensive end. He continued to lead when he joined the Army National Guard in 1986, attaining the rank of staff sergeant and eventually leading soldiers into Iraq in 2003.

“The guys called me Sergeant Rock because I could be hard on them,” says Joey. “We had to buckle down and get it right. No messing around. I didn’t want to go to war with those guys not knowing what to do.”

The hard work paid off when everyone in Joey’s unit returned home from Iraq. But four months into the deployment, Joey hurt his back jumping off his truck in response to some incoming small arms fire. He worked through the pain for another four months, but when doctors found out he’d broken his C-7 vertebra, he was flown to Germany for medical treatment.

During the trip, Joey met a 19-year-old soldier with a piece of shrapnel in his neck who kept asking “why me?” while holding Joey’s hand. When they landed in Germany, the soldier passed away. The survivor’s guilt Joey felt because of that experience, coupled with the danger he was in on every mission in Iraq, left Joey with post-traumatic stress disorder (PTSD). “I still dream about those experiences,” says Joey. “Those are the hardest things to overcome.”

Joey’s search for help with his PTSD led him to Wounded Warrior Project® (WWP), where he found a new opportunity to assume the leadership role he sorely missed from the military. “WWP took me in and gave me a purpose again by letting me be a part of the Peer Support program,” says Joey. “It gave me a chance to lead again so I could help my fellow brothers and sisters get back on track with their lives.”

Shortly after starting his journey with Peer Support, he attended a multi-day mental health workshop called Project Odyssey®. “I think every warrior suffering with post-traumatic stress disorder or traumatic brain injury needs to go through Project Odyssey,” says Joey. “It really impacted me a lot to be around other warriors who were suffering with the same things I am. And it really made me grow a lot as a peer support group leader.”

More recently, Joey went on a WWP Soldier Ride® that kick-started his physical fitness journey, resulting in the loss of nearly 50 pounds. He also worked with the WWP benefits service team to advocate for increased disability benefits from the Department of Veterans Affairs (VA). “The increase took some of the stress off of us,” says Joey. “My son will get to go to any college in the State of Louisiana for free and he’ll get a stipend to help him out with books and living expenses. So, that means a lot to us.”

Joey credits his VA therapist, WWP, and his service dogs for helping him learn to live with PTSD. Now that he’s thriving, his next mission is simple: He just wants to keep helping as many warriors as he can.