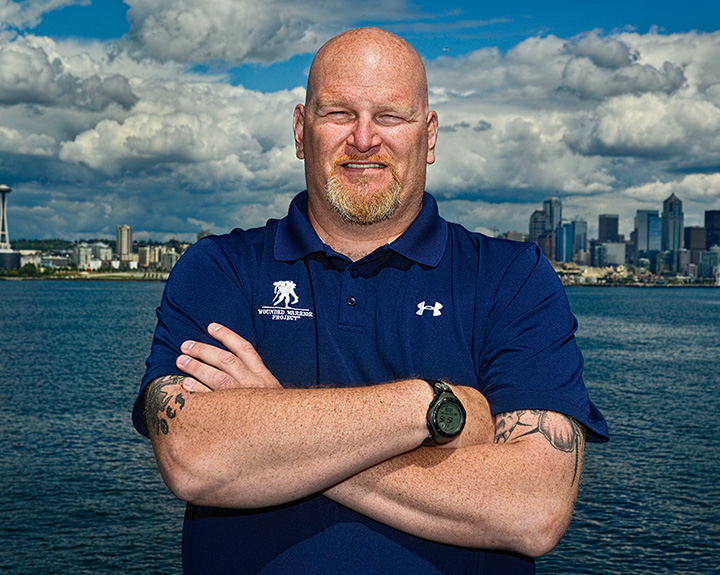 “Wounded Warrior Project is the backbone of my continued recovery. The programs and activities WWP offers are an outlet that enhance my emotional strength."

Keith Sekora’s friends and family had one question for him when he decided to join the Air Force after 9/11: “Haven’t you done enough?”

They had a valid point. Keith joined the Army in 1989 and served for 10 years. His experiences included Operation Desert Shield and Operation Desert Storm; deployments to Panama and Honduras; and relief efforts to help victims of Hurricane Andrew.

“I could see their argument,” says Keith. “At the time, I had a good job as a police officer with the King County Sherriff’s Office in Seattle. But after 9/11 happened, I still felt I should be doing more. It was a calling I felt drawn to accept.”

In the Air Force, Keith served as a combat arms instructor and shared his wisdom with airmen so they could be prepared for combat. But it still wasn’t enough for Keith, so he joined the ordnance disposal unit and deployed to Afghanistan. He grew proficient at disarming bombs and dismantling mine fields, which attracted the attention of the enemy.

During a mission with a special forces unit, Keith was loading a large munition into his truck for future disposal when he felt something akin to a baseball bat striking his back. When the medic couldn’t find an entry or exit wound, Keith was cleared for service.

“He told me no blood, no foul. I was hurting, but I was good to go,” Keith says.

Yet, he wasn’t. Less than 32 hours later, the result of the injury was finally revealed. The neck guard on Keith's body armor had pushed into his neck, slightly tearing his artery and dislodging blood clots. In rapid succession, Keith had four major strokes and 18 mini-strokes. Clots were flowing to his brain like salmon up stream.

“I wasn’t getting any better or any worse. So they medically retired me. I thought everything was over. I was paralyzed, and my future looked worse than bleak. I considered myself a burden.”

That’s when Keith signed up for a Naval Adaptive Sports Camp in Port Hueneme, California, where he met fellow paralyzed Air Force veteran Chris Wolff, and as Keith puts it: “The rest is history.” The two soon became best friends, busting on each other in good humor. Chris even gave Keith a nickname -- “Foot-Skip” -- because he dragged his left leg when he walked.

“Yeah, you can hear me coming down the hall,” jokes Keith. “He’s just jealous that I’m faster, stronger, and better looking than he is. We expect a lot from each other -- whether that’s defeating our opponents in seated volleyball or taking another step today toward recovery. He’s my inspiration.”

Keith says inspiration carries him -- and his goals -- a long way.

“My number one goal is to be the best dad I can be,” says Keith. “And I’m working on making the U.S. Paralympic team in archery for the games in Rio in 2016. With the support of my friends and family, I see no limits to what I can accomplish.”

It’s that kind of inspiration that Keith wants to share with his fellow wounded warriors.

“Wounded Warrior Project is the backbone of my continued recovery. The programs and activities WWP offers are an outlet that enhance my emotional strength. Sometimes just having other warriors to socialize with, to share a bond, to understand each other’s struggles, is what it takes to accomplish the next step in healing. That’s why I want share as much about WWP with other injured vets as I can.”