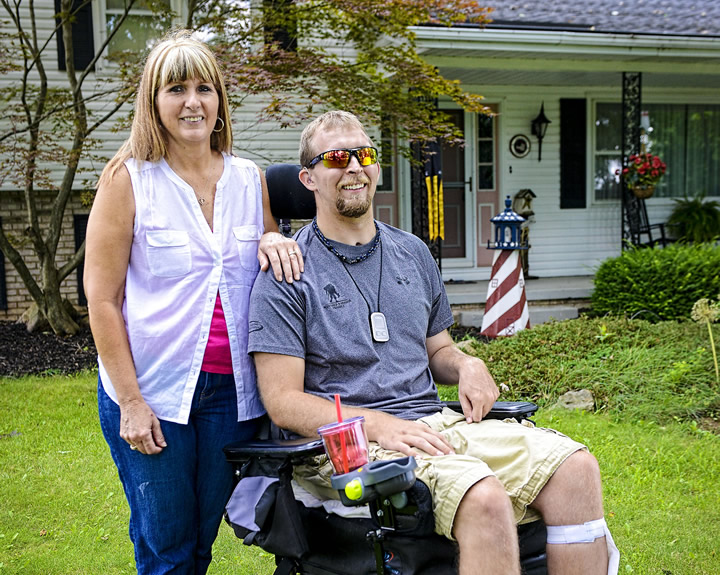 When she got the call in 2010 that her son, Josh Sommers, was nearly killed by a grenade in Afghanistan, Lisa Hopkins knew her top priority was now her son. She immediately left her manufacturing job and home in Ohio to fly to be by Josh’s bedside.

With the help of the Fisher House Foundation, Lisa stayed in Tampa the entire eight months Josh was in a coma. She visited with him at the hospital from 7 am until bedtime every day. When Josh was taken off his feeding tube, Lisa wheeled him to the zoo in his comatose state to try to stimulate his brain. She took him to the aquarium and pointed out the fish and whales hoping for a response.

“At the time, they told us that was as good as he was going to get,” Lisa said. “But I would do anything to try and get him better.”

Josh finally woke up in March 2011. It was the start of a new life for the two, a life in which Lisa would be a full-time caregiver and Josh a full-time patient. Josh had to re-learn to brush his teeth, pull on a shirt, and feed himself. He remains partially blind, deaf, and paralyzed on the left side, but with his effort and Lisa’s around-the-clock care, he has already rewritten his diagnosis.

“For a while there, it was looking like I was going to be incapacitated my whole life,” says Josh. “I’m not invincible, and everybody has their problems, but what I’ve learned is that I can’t give up.”

Josh had enlisted in the United States Army in 2008, seeking a way to serve his country and an opportunity for a lifelong career. He began working in intelligence at the forward operating base in East Paktika, a province in Afghanistan. Wanting to help his team on the front lines, Josh requested to be transferred to the infantry.

Four months into his deployment, Josh was hiding behind a tree to monitor an insurgent training camp when a rocket-propelled grenade exploded nearby.

“I look at is as a part of life and what happened, happened,” he says. “I don’t regret joining the military. Not for a second. I wanted to do my country a service. I wanted to be a part of something and get out there and do something other than odd jobs.”

The family found some semblance of normalcy when Lisa learned about Wounded Warrior Project® (WWP). Eager to meet people who could relate, they traveled to Chicago in August 2012 for the Air and Water Show. Josh said it was the first time he found veterans who understood his struggles and could share stories of recovery.

WWP sporting events helped Josh stay active in ways he never thought he’d be able to again. In the past year, Josh has gone water skiing and cheered for the Cleveland Indians with other veterans.

“It’s amazing that they give soldiers like me an opportunity to do things that we would have never been able to do, disabled or not,” he says.

In October, Josh walked 1,000 feet for the first time without the assistance of a treadmill. His goal is to be fully mobile in five years and to learn Braille so he can return to his love of reading. Most of all, he wants other veterans to know hope is out there.